2014 The necessity of the social and civil dialogue 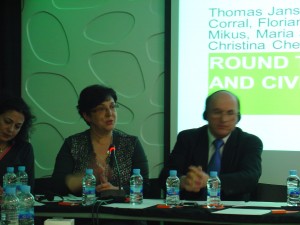 Report of the seminar of Madrid 24th of April 2014

The presentations of this seminar you find here

During the morning Michel Debruyne held a presentation on minimun wages, Stephen Bach on social dialogue in public services and Eva Heidbreder on civil dialogue: PRESENTATIONS OF MADRID DURING MORNING

A report book of this seminar will be published soon.

The Alliances to fight poverty came together in Spain the 24th of April 2014 to discuss the impact of the crisis on the social and civil dialogue. One of the perverse effects of the crisis and especially of the austerity measures is the deterioration of democracy in Europe. The seminar was meant to discuss how the social and civil dialogue can be enhanced.

Almost in every country of Europe the social dialogue is hollowed out. The trade unions from Croatia, Romania, Spain and even Sweden bear testimony to the lack of a social dialogue on the national level. ETUI, the research centre of the European Confederation of Trade Unions, made it very clear. On the European level the social dialogue has disappeared or is transformed to a sectoral dialogue. The same trend can be seen on the national level. This is not a coincidence, but is done on purpose. Without a strong social dialogue it is much easier to reduce the wages, to ignore the demands of the workers, to implement more flexibility, to impose severe austerity measures. And –like in Spain- this doesn’t halt the public to protest, there is still the possibility of brutal force.

The consequences of this top-down policy is that our democratic institutions are hollowed out. Trade unions have lost the power to raise their voice in these institutions, they can’t defend anymore the working populations.

Especially in public services where the government can take easily decisions top-down there is a structural trend to neglect the social dialogue. And when it pours in the public sector, it will rain in the private sector.

The employers are welcoming this situation. They are not taking any step to unlock this situation. But, the Belgium trade union gave an example of where social dialogue was also in the purpose/interest of the employers. And then , they came to the table. The representative of the Belgium trade union suggested them to look for topics that are also in the interests of the employers to safeguard the social dialogue.

The Alliances see a growing trend to sectoral and occupational collective bargaining processes. We see it on the European and at the member-states level as well. These trend has some perverse effects: the solidarity between workers can be hollowed out. The social dialogue becomes fragmented without a backing from the national or European level.

Therefore the Alliances demand  urgently an initiative from the Commission to start the social dialogue up.

The discussion on minimum wages – a topic that the Alliances also discussed in Madrid- could be a perfect start. The Alliances want a high minimum wage in each country. It is about justice and it is a buffer against social dumping. On the European level there should be a process that guarantees a high minimum wage on the national or sectoral level. The Alliances understood very well the doubts that some trade unions bring forward. The European procedure should respect the autonomy of the collective bargaining on national or sectoral level.

Therefore the European civil organisations must invest in their dialogue with the European public. It is the task of Europe to give them the necessary tools to do this difficult job.

Therefore the Alliances demand an enhanced civil dialogue. This means a real dialogue with answering and arguing. A real dialogue that have clear results and is transparent to all.

The Alliances are aware that with a growing Europe the task for the civil organisations and for the trade unions are becoming heavier. They have to fight on the different levels: local, regional, national and European level. Each level is important and we need to discuss with each level to obtain some results.

Therefore the Alliances demand  that Europe should be aware of the growing complexity of the multilevel governance of Europe. She must not use this complexity to reduce democracy, but she must enables trade unions and civil organisations to enhance European democracy.

The Alliances will work further on these several proposals and propagate them among the European Parliament and the European Commission.